Veganuary has been gaining popularity over the years and more people are trying it all around the world. It has been reported that 1 person has signed up to the Veganuary challenge every 6 seconds this year and that 2019 will be the year of the vegan! Taking the pledge couldn’t be easier, all you have to do is go to the Veganuary website and sign up. There is a lot of information on veganism, recipes, an eating out guide and even a vegan starter kit.

If you are taking the Veganuary challenge, or if you are not but simply want to eat more vegan and plant based meals, we have you covered. While this recipe site also has lots of vegetarian recipes, it has become increasingly a resource for vegan recipes and meals. The reason is that most of the meals I make are vegan anyway and aside from ethics, eating plant based meals is the most environmentally friendly action any of us can take to reduce our impact on this planet on a personal level.

Butternut squash soup is a classic when the weather starts getting colder, so it is perfect for Veganuary. This version uses spices such as cumin, ground coriander, and star anise to inject warm flavours for a taste explosion. Read the full spiced butternut squash soup recipe. 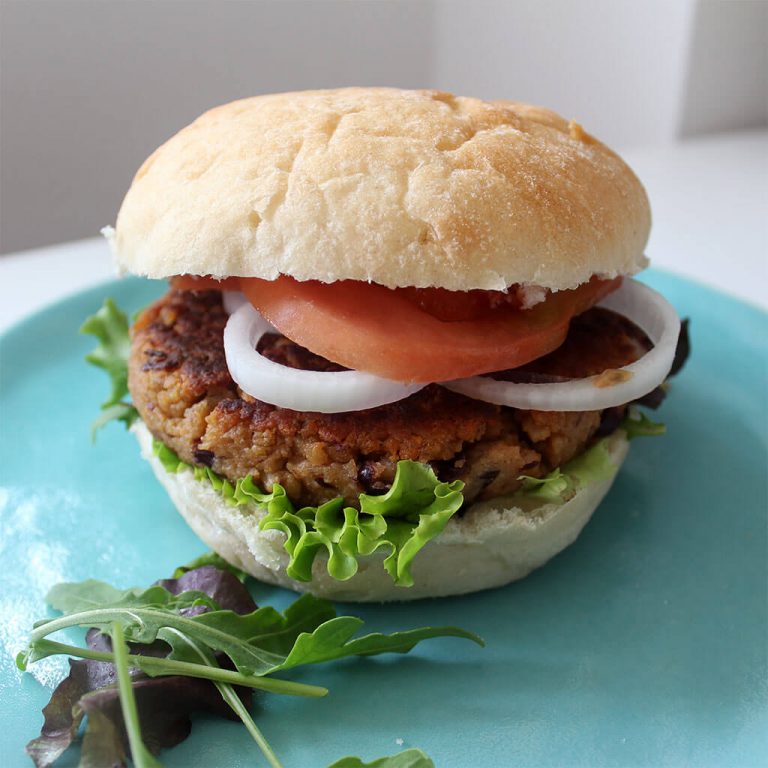 There is no reason why a burger can’t be tasty and meat-free at the same time. This burger is made with kidney beans and dried soya mince infused with umami flavours so that it stands on it’s own as a veggie burger worth making. It only takes 15 minutes to prepare so it is a good vegan ‘meal in a hurry’. Read the full kidney bean and soya mince veggie burger recipe. 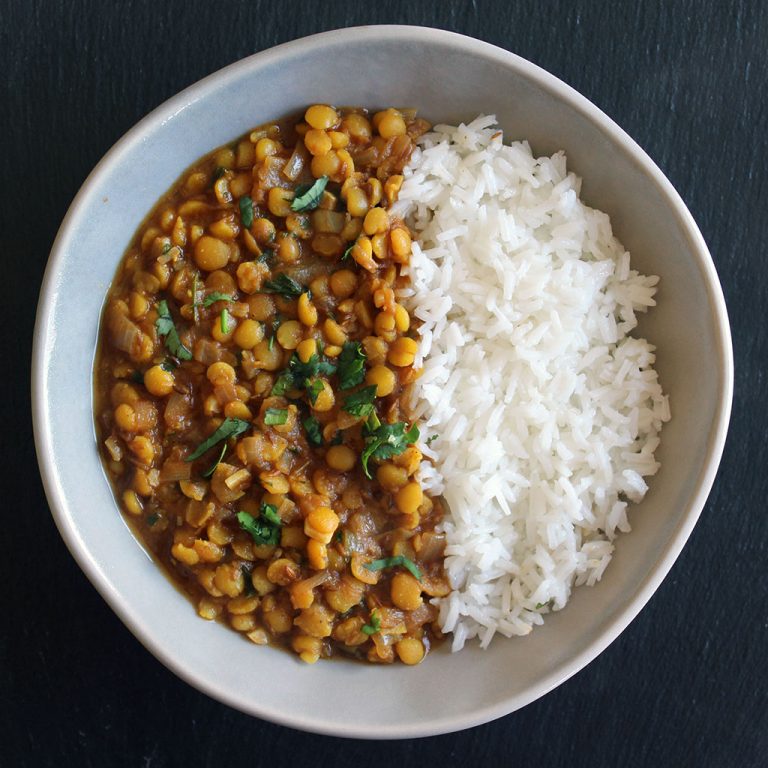 Indian food is pretty hard to beat and it isn’t as difficult as people imagine it to be, not by a long-shot. This yellow split pea dhal is very tasty and relatively simple to make. It is a healthy and incredibly tasty meal that happens to be vegan and can be made in advance, even frozen in batches. Read the full yellow split-pea dhal recipe. 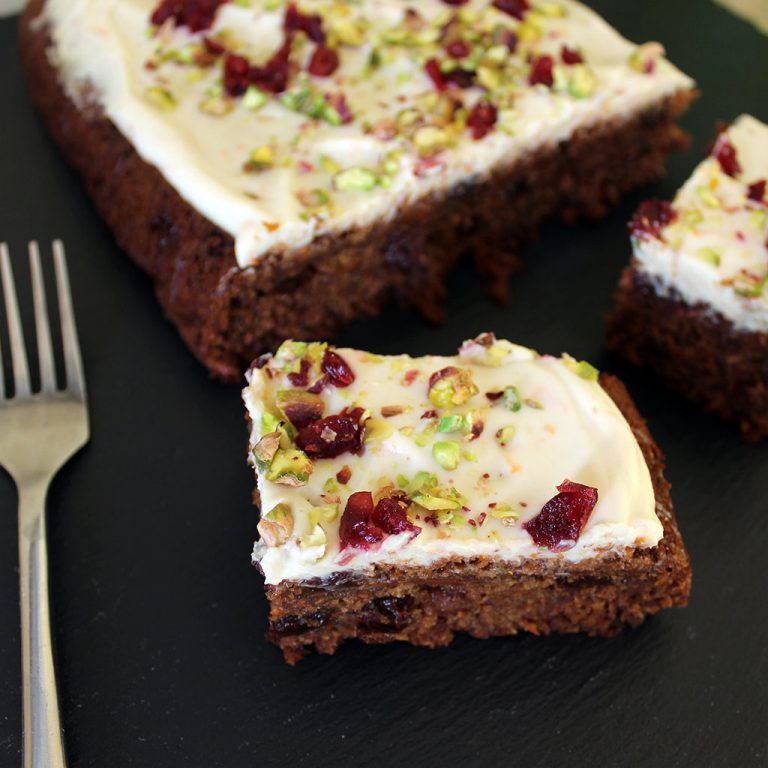 Making a vegan version of the traditional carrot cake may sound like an impossibility since it usually has a cream cheese frosting. In this recipe the cream cheese is replaced with a tangy and creamy topping made from tofu (yes, really!) and the cake is moist and full of flavour. In fact, one time I made some non-veggie friends take a blind taste test between this version and the regular non vegan version of carrot cake and they couldn’t tell the difference!  Read the full vegan carrot cake recipe. 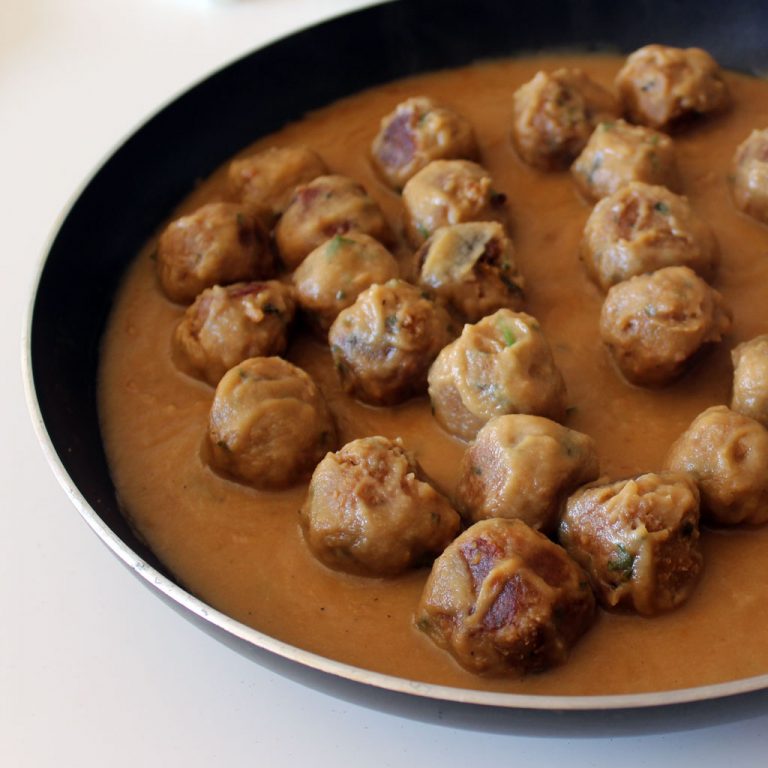 It may seem a bit of an oxymoron to call anything vegan with the word meat in it, but these meatballs have the same great taste and texture but without any meat! This recipe is based on the Spanish albondigas recipe which I grew up with, but replaces the meat with dried soya mince and chickpea flour. The taste comes in the combination of umami flavours used. Read the full vegan meatballs recipe. 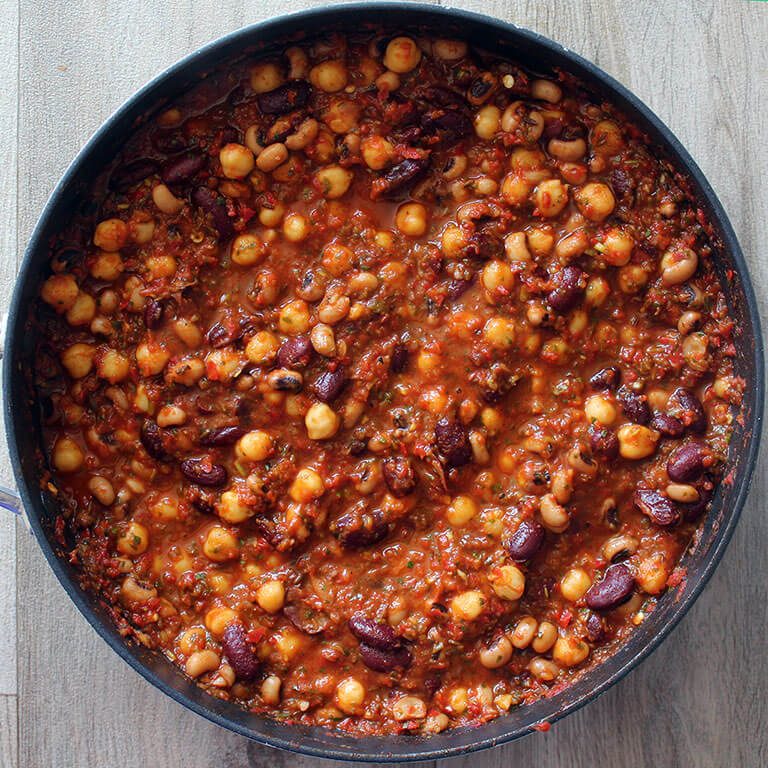 The classic chilli con carne recipe can be easily veganised using beans instead. Three different types of beans are used to provide the chilli with different tastes and textures. The cooking method may seem a bit unconventional but it packs a serious punch of flavour as well as saving on time. You can make this as spicy as you like and even make it in batches and freezes well. Read the full three bean chilli recipe. 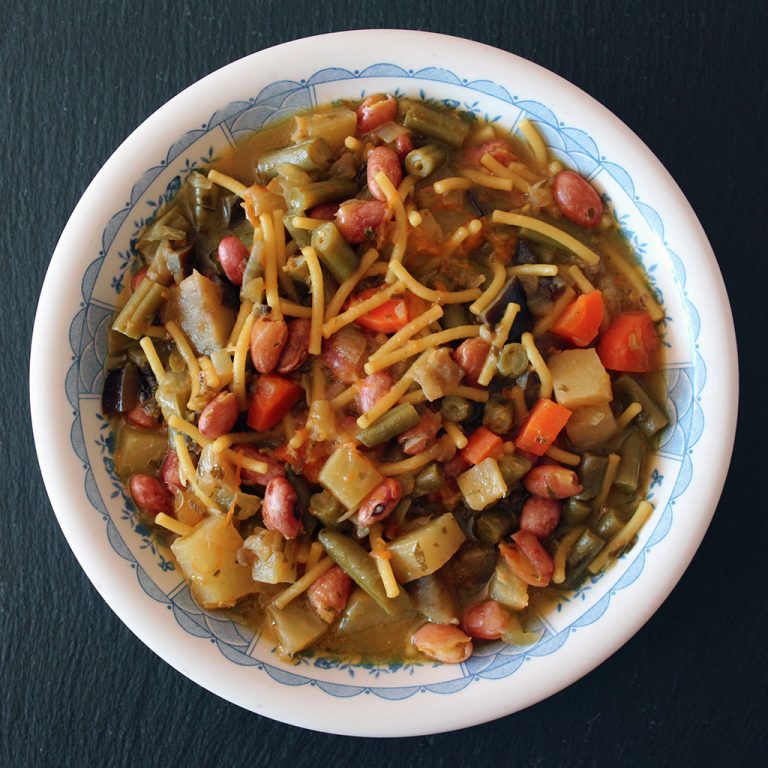 Minestra is a classic dish from Gibraltar, of Italian origin. It is a stew with borlotti beans (can be substituted for pinto beans), lots of diced vegetables, fideos which are short pasta noodle strands, and a hint of basil. Absolutely delicious, and goes to show that traditional meals are still worth making. Read the full minestra recipe.

January is the month of new year resolutions, diets and good intentions…however if you’re not concerned by any of that and are wondering whether there are any great vegan sweet treats then this is a recipe for you. These chocolate brownies have nothing to envy the regular ones. They are made with sweet potato and dates for texture and sweetness and a double chocolate helping with melted chocolate and cocoa powder. These are seriously moreish and can also be frozen if (like me) you can’t trust yourself to keep them for long. Read the full date and sweet potato chocolate brownies recipe.

Spanish lentil stew is a dish that is very easily veganised. The chorizo in the regular version is replaced with some extra sweet smoked paprika and some dried red peppers, as well as a bit more garlic. These are the main flavourings in chorizo so it makes sense to use them in this way as a replacement. This recipe is seriously good as well as healthy, and a great way to get more pulses into your everyday meals.Read the full Spanish lentil stew recipe. 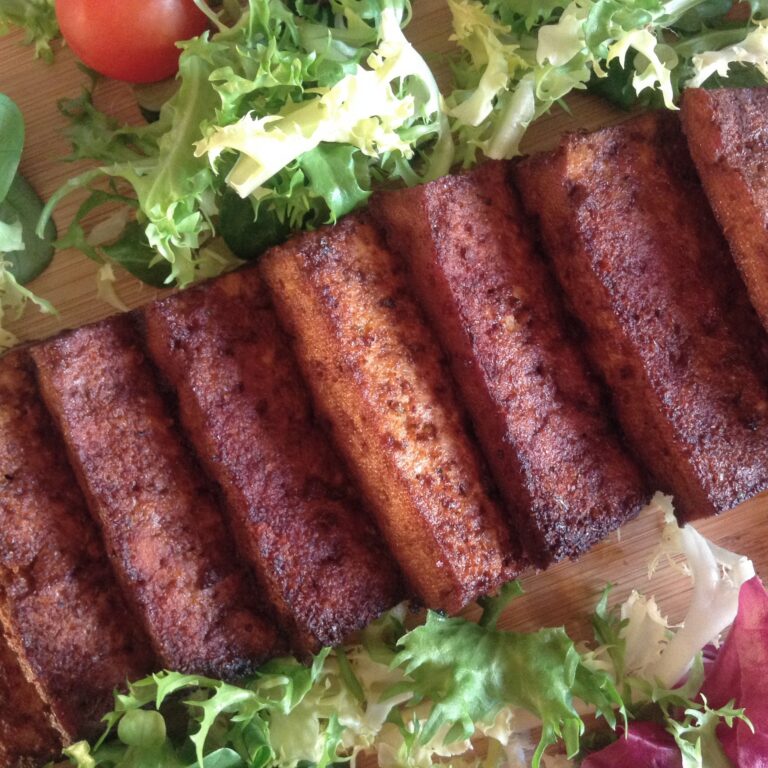 Still don’t know how to use tofu, or think tofu is bland? This recipe is for you then. Yes, tofu is bland, but that is also it’s strong point because it means that you can flavour it whichever way you like. It will take on whichever flavour you give it. Here the tofu is sliced, marinated (which only takes minutes to prepare), allowed to marinade (the longer, the better) and then baked in the oven. You can prepare this in advance and then bake when you get home from work. Read the full baked marinated tofu recipe. 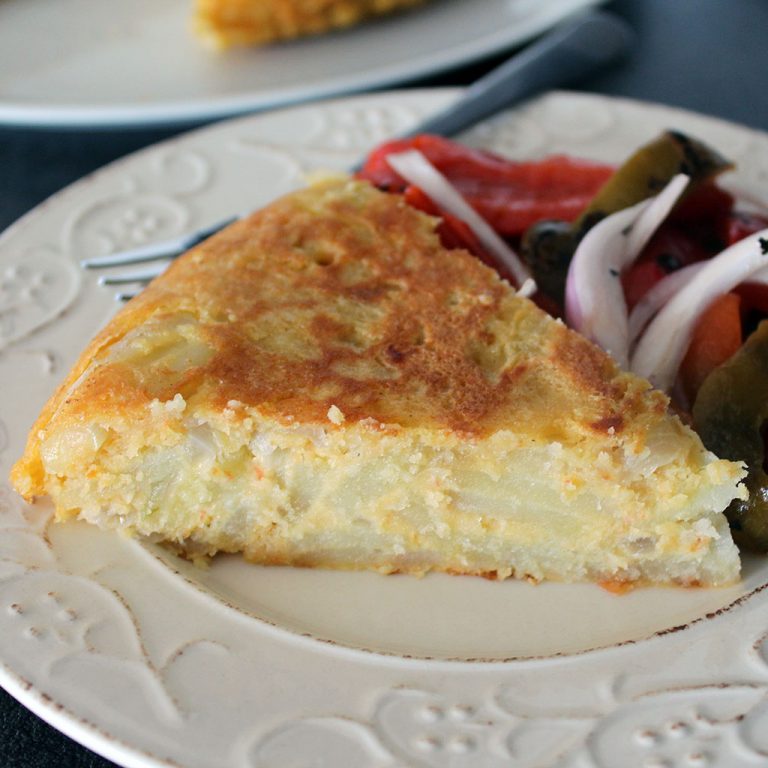 Is it possible to make an omelette without any eggs? Absolutely! The secret is to use chick pea flour which sets in a similar way to eggs. Sure, the texture is not exactly the same but it is close enough to make this a very viable and credible alternative, even to the most critical of palates. Another secret is to use kala namak, which is also known as black Himalayan salt. It has a high sulphur content and has an eggy taste, so it serves to flavour and season at the same time. If you don’t have any don’t worry, it’s not essential and will still be good without. Read the full egg-free Spanish omelette recipe. 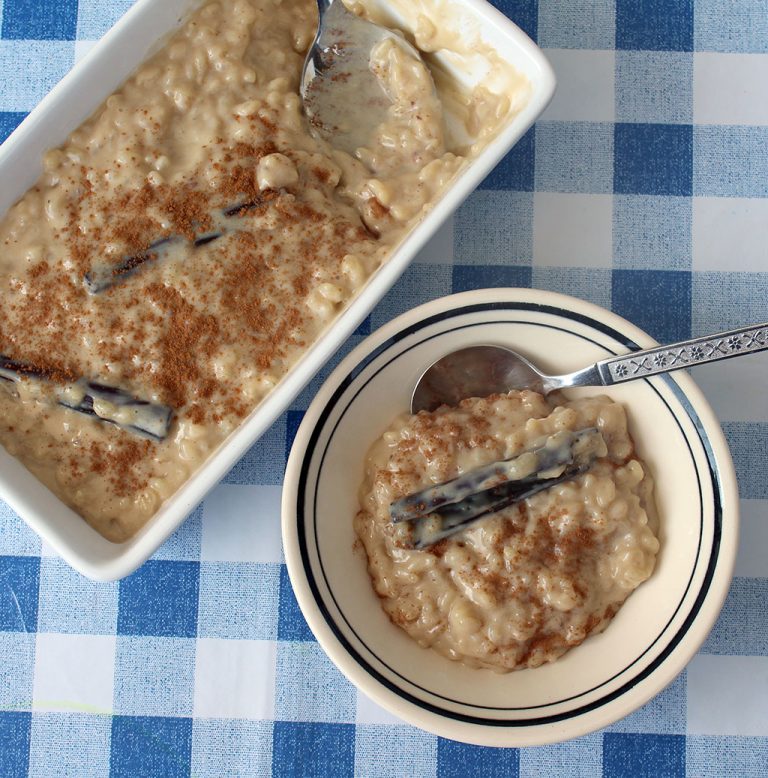 I always like to end a meal with a sweet note and even though rice pudding may seem like an odd choice for some, it is a desert I grew up with. Arroz con leche, as it is known in Spain, is a classic desert here. Unlike it’s northern European rice pudding cousins, arroz con leche is infused with cinnamon and lemon zest, a classic combination in Spanish sweets and served cold. This is a dairy free version which I make with soya milk and oat milk. Dairy-free arroz con leche is a tasty sweet for any occasion. Read the full vegan rice pudding (arroz con leche) recipe.