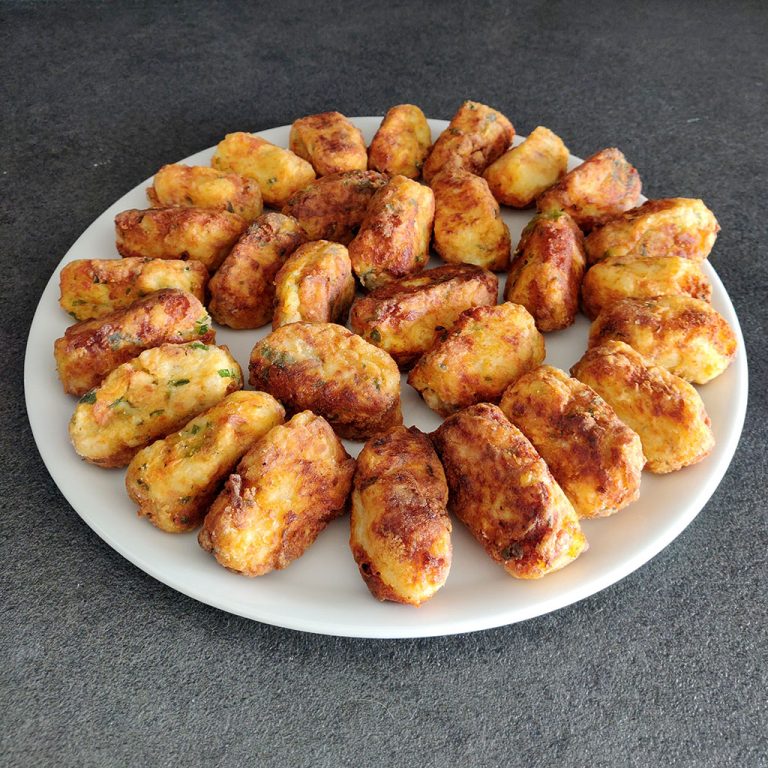 Every family has its own version of croquettes, or ‘croquetas’ as they are known in Spanish. Usually they are made with a thickened bechamel sauce with other ingredients, that are then battered in flour, sometimes egg and breadcrumbs, and fried. They can also be made with potato instead of bechamel (such as this recipe).

In Spain they are many times served as a tapa, although this is traditional and frugal that has the main purpose of using leftover ingredients, usually meats. This version, however, is vegan / vegetarian (both options are given in the ingredients and method).

This recipe is based on my family recipe and both my mother and grandmother have always made croquettes with potato instead of a thickened bechamel sauce. In my (biased) opinion they are tastier this way and much easier to make. In my family recipe the croquettes are also just dipped in flour and then fried, which saves time and mess, without having to dip them in egg and breadcrumbs. It also helps to keep it vegan if you so wish, but you can add those extra steps.

Croquettes tend to be made with leftover cooked meat or tuna. To make them vegan or vegetarian all you have to do is substitute that for some plant-based meat. You can use mince, sausages, or any other substitute; whatever you have to hand. I like to use Quorn, microwaved as per the packet instructions and then finely diced or pulsed in the food processor.

For the vegan version the egg is substituted for chickpea flour and water, combined into a paste. This will have serve same effect of binding the mixture and you can also add some Himalayan black salt for some eggy flavour.

The croquettes once fried are crispy on the outside, smooth and creamy on the inside and absolutely moreish and delicious!

Join VeggieGib for email updates and get a FREE eCookbook with 15 easy and tasty veggie/vegan recipes.
Thanks! Please check your emails to confirm your subscription and you will be sent the FREE eCookbook. If you do not see the email please check your spam/junk mail folder.
Croquettes
Yield: 30-32 Servings
Difficulty: Medium
Prep time: 1 Hour 10 Minutes
Cooking time: 30 Minutes

A vegan / vegetarian version of the traditional Spanish 'croquetas' recipe, made with potatoes instead of a bechamel sauce. Easy, simple and very tasty traditional food that tastes like the regular version with a few simple substitutions.