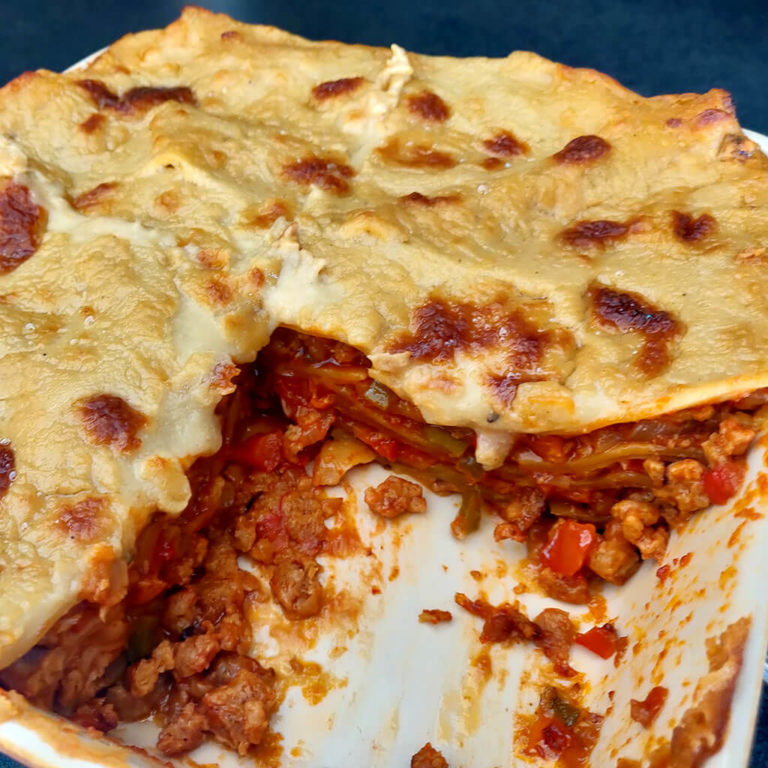 Lasagne is a firm family favourite with many people and there is no reason as to why a vegan version wouldn’t be just as delicious. Sure, one of the best things about the regular lasagne is the cheesy bechamel source that gets roasted and browns in the oven, however it is possible to make a tasty bechamel with no  dairy milk and nutritional yeast. The cooking and assembly process is very similar if not the same.

In this recipe I make everything from scratch, from the mince to the bechamel sauce. I like to use dried soya mince when making vegan dishes because some store bought meat mince substitutes are not vegan and contain egg. This advantage of this is that not only is it more economical to use dried soya mince, but you can also flavour it whichever way you like. I like to use yeast extract, Maggi’s Jugo sauce and some liquid smoke to give a savoury meaty punch. You can let the dry soya mince hydrate for a few minutes and then develop even more flavour by browning the mince before putting it into a sauce. The option however is entirely yours, if you choose to use store bought then you can skip the first few steps and proceed directly to making the sauce.

I don’t tend to use herbs in my tomato based pasta sauces for spaghetti or lasagne, this is my own preference, but you always add a pinch of oregano, thyme, or basil. One thing to bear in mind is to not allow the sauce to reduce too much because the pasta sheets will absorb all the liquid.

Overall the result is fantastic, I’m sure even non-veggies would not complain or even notice. The absence of cheese is noticeable in that the nutritional yeast does give a savoury cheesy flavour but it is not quite the same. Very tasty, but not the same. However if you can find vegan parmesan then you could incorporate some for extra flavour.

Join VeggieGib for email updates and get a FREE eCookbook with 15 easy and tasty veggie/vegan recipes.
Thanks! Please check your emails to confirm your subscription and you will be sent the FREE eCookbook. If you do not see the email please check your spam/junk mail folder.
Vegan Lasagne
Yield: 4 Servings
Difficulty: Medium
Prep time: 30 Minutes
Cooking time: 1 Hour 40 Minutes

Lasagne is quite an easy dish to make vegan. The meat is substituted with dried soya mince which can be flavoured in many different ways, and the bechamel can be made with non dairy milk and nutritional yeast to give it a more cheesy flavour. The result is a delicious lasagne that can be made in advance and will be enjoyed by everyone.

For the “meat” substitute

For the sauce and lasagne

For the “meat” substitute

For the sauce and lasagne

You don’t have to brown the soya mince but it will improve the taste and texture of it. In fact when flavoured properly as per the ingredients in this recipe and it is browned it makes a very credible meat replacement. You can also use any other meat mince substitute available in shops, however some of these are not vegan and I like to flavour it to suit my taste.

For the bechamel sauce I like to use oat milk but soya milk works just as well.