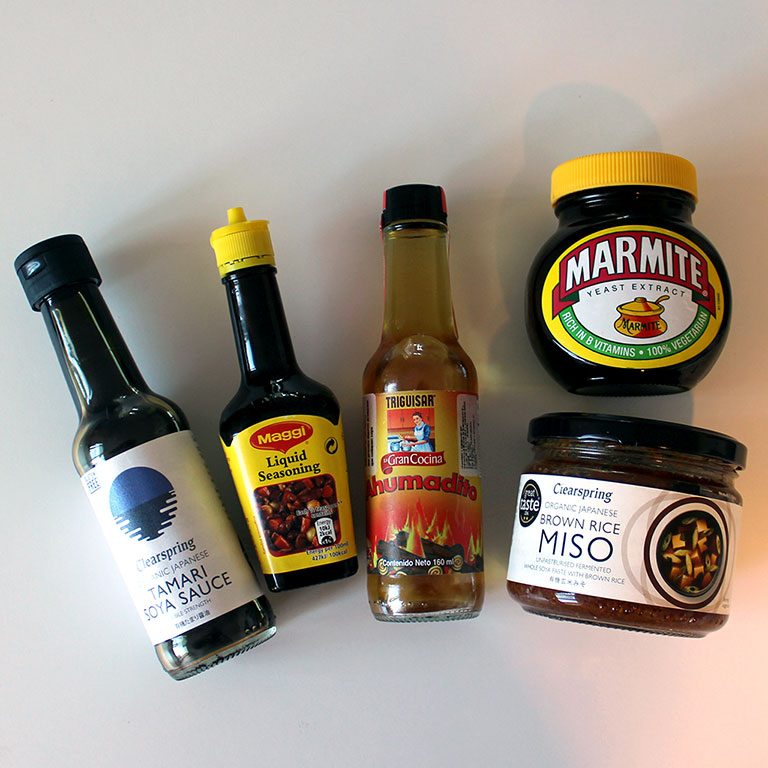 The impression many people have of vegetarian or vegan meals is that they are bland and that a meal without meat or fish will lack flavour. This is a misconception because it is perfectly possible to recreate the flavours we are all used to or grown up with in our foods. In fact, ever since giving up meat I made it my mission to make veggie versions (usually vegan) of dishes I have grown up with without compromising on taste. Through trial and error I found that not only is it possible, but it is also quite easy to do in many instances using easy to find ingredients.

The key to creating savouriness when using condiments such as yeast extract or miso paste is to rely on your own taste buds. The ingredients listed below are bursting with umami flavours and it may seem a bit like alchemy to use a bit if this and a bit of that to recreate savouriness, but it does work and the results will be evident in much tastier meals. One thing to note is to go easy on the salt and to add salt to taste after any of these ingredients have been added because these ingredients (such as yeast extract and Maggi seasoning) are quite high in salt to begin with, so there may be cases where no extra salt is required. 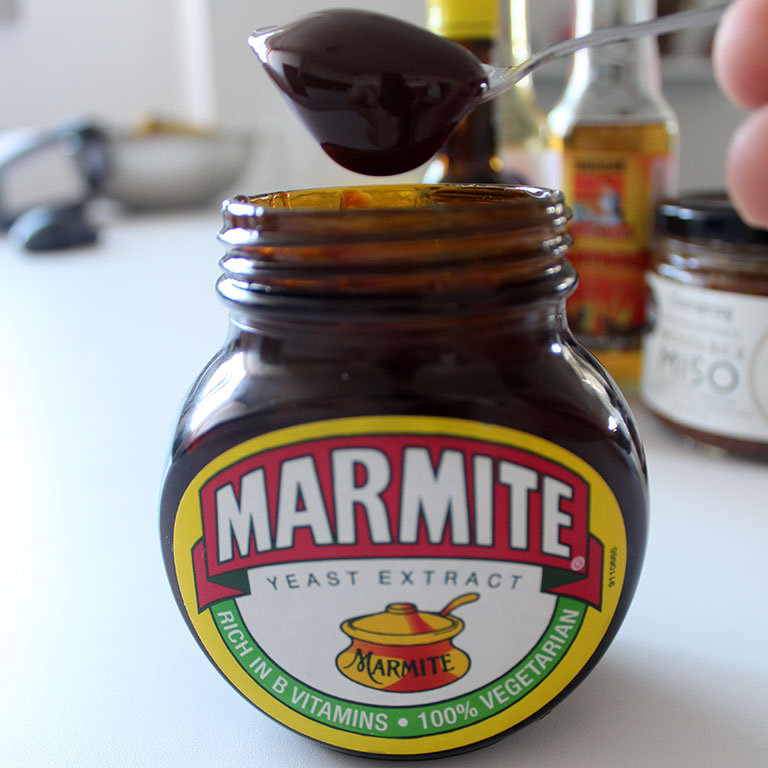 There is a saying in the UK about Marmite (the leading brand name of yeast extract), that you either love it or hate it. In my case I never liked it enough to put it on my toast as some people do, but don’t hate it either. I do think it is a fantastic condiment and is used in the food industry to create savoury flavours and umami taste sensations. If you look at the ingredients of many savoury snacks and foods you will see yeast extract listed as one of the ingredients.

When I decided to look into the ingredients of beef stock cubes out of curiosity at the beginning of becoming meat-free (I used to use them all the time) and saw that there was a lot more yeast extract than actual meat extract I thought, I might as well try it on it’s own! Yeast extract does indeed have a meaty savoury taste that works especially well in sauces. The scientific reason it works so well is because the amino acid profile and also the taste is very similar to a beef bouillon, as well as containing glutamic acid, an amino acid found in meat, cheese, soy sauce, fungi and vegetables, including mushrooms, broccoli, and tomatoes.

Yeast extract is also rich in vitamins as well as B12 which is of particular interest to vegans. Yeast extract is vegan and therefore a wonderful ingredient to use to take dishes to the next level. A little goes a long way, and plenty of recipes on this blog feature a little yeast extract. This is found in all UK supermarkets, in some larger Spanish supermarkets and in other countries such as Australia, it is known as Vegemite. 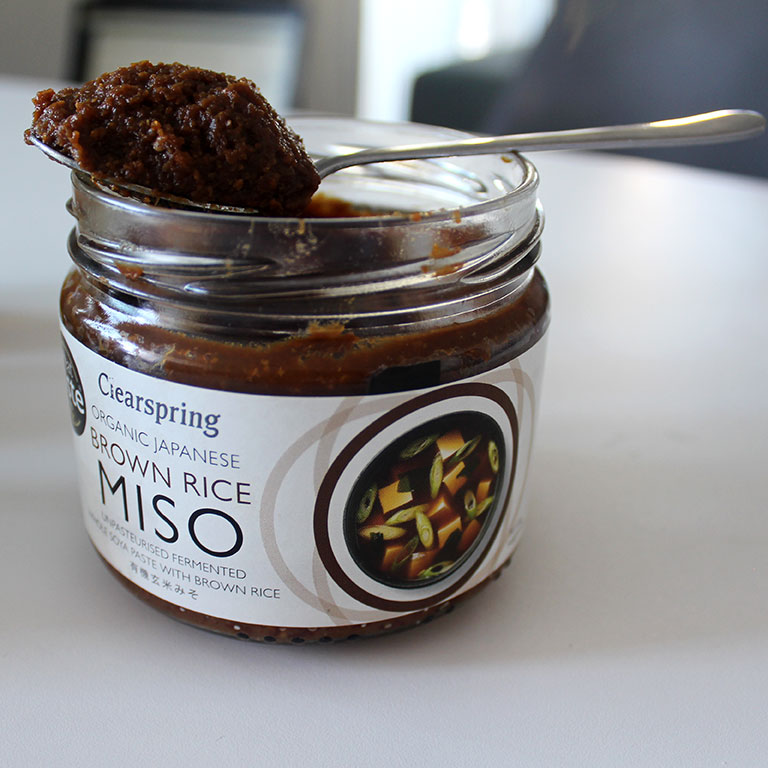 Miso paste is a traditional Japanese ingredient and can be found quite easily in most supermarkets these days. It is a paste made from fermented soy beans. and it is the main ingredient in the Japanese miso soup. Miso paste is great in marinades, soups and sauces.  The most common type is brown miso, which has been allowed to ferment for longer and has an intense flavour, and then there is the white or yellow miso paste which has a more mellow and softer flavour. Other ingredients can be added to give different tones of flavour, a popular one is brown rice which gives it intensity, while others may include buckwheat. 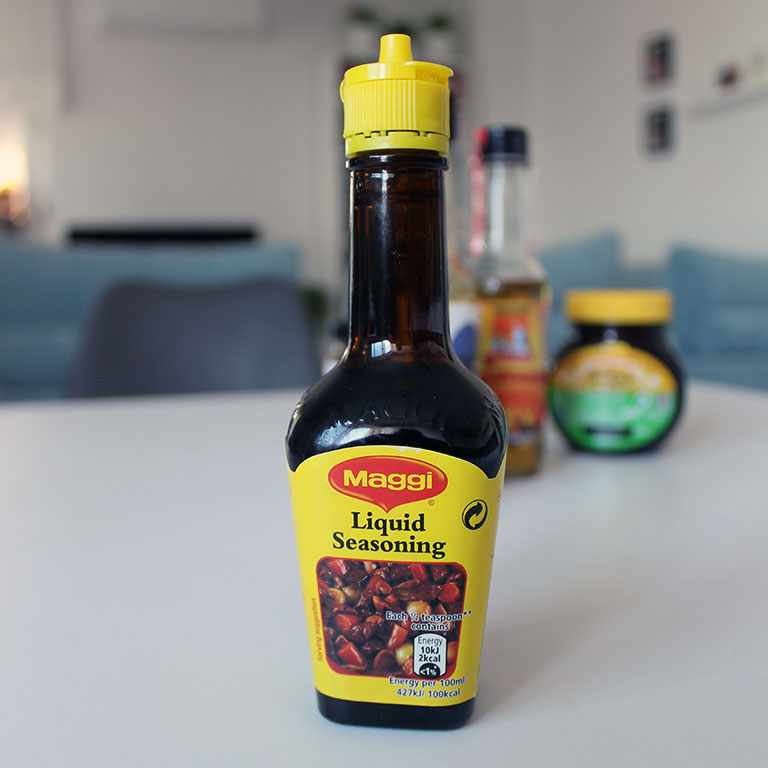 Maggi seasoning is available in a large number of countries and may not be that well known but I have seen it in most supermarkets. It is made from hydrolysed vegetable (soya) protein and was developed in Switzerland in the 19th century. It has a rather thin consistency, like soy sauce and is quite salty. It does enhance the savoury flavours quite nicely and it is recommended that only a few drops are used at a time. All I can say is that dishes many times taste better with Maggi seasoning so I tend to use it all the time. It can be found in other parts of the world as Maggi Jugo sauce, and is consumed a lot in Asian countries, these days seen as somewhat of an essential ingredient in Chinese cooking. 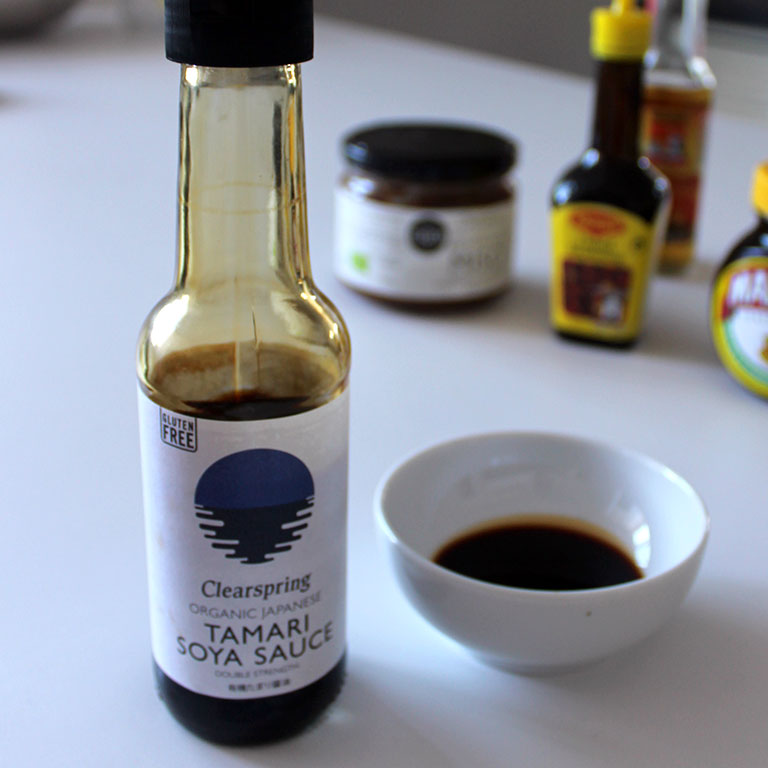 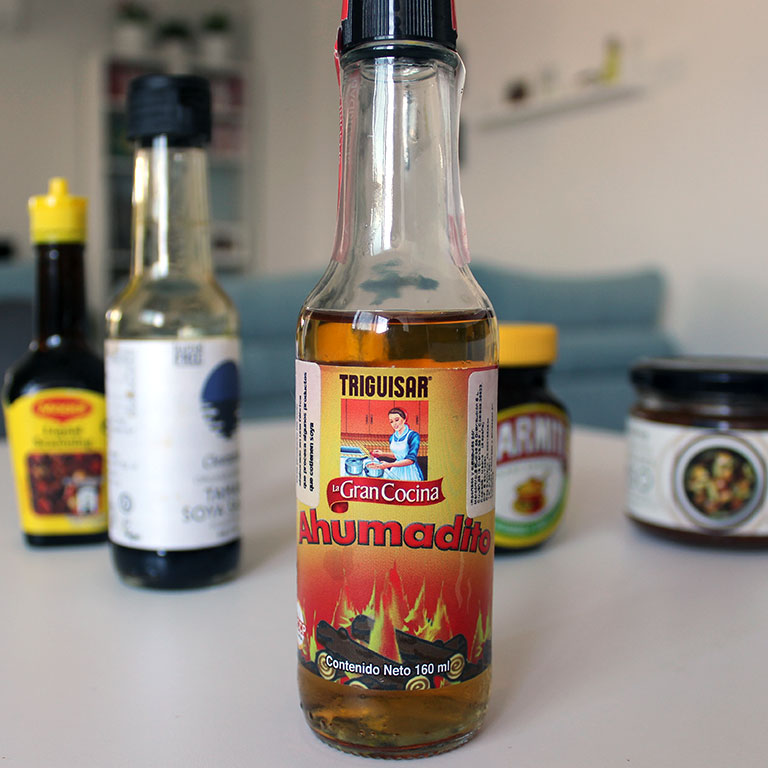 This may seem like a strange ingredient to use, and I admit to only using in some dishes. It is normally used in Latin American cuisine but it gives an intense smoky flavour, so only a few drops are needed if your dish could do with a smoky accent to it. It does indeed give flavour and has an aroma reminiscent of bacon or pancetta. I must stress this ingredient is vegan and should be used at the end of the cooking process to give that smoky flavour if you so wish.

So far the other ingredients listed are liquid or paste (still liquid for all intents and purposes) but porcini mushrooms are solid and dry. Other dry mushrooms are also good to use to infuse savoury and umami flavours, such as shiitake and oyster mushrooms, or even a combination of all of them. The key is to use dry mushrooms as they have a pungent, earthy and intense flavour that will give a dish richness and savouriness.

There is an art to using mushrooms to give flavour as there are many times when you may not want an obvious mushroom flavour. They can be used ground up when making seitan or even veggie meatballs. They can also be used in pasta sauces and soups. If you do not want to use the actual mushroom you can always soak them in some hot water for about 15 to 2o minutes and use the liquor which will have the infused flavour. More than savouriness dry mushrooms give depth of flavour.

In the recipes on this blog I will usually use a combination of these ingredients, however this is based upon my own taste but I do encourage some experimentation as to what ingredients you prefer and indeed what combinations you prefer. What I would recommend is to have them in your pantry and always available to make your veggie and vegan dishes absolutely delicious! One word of warning is that if you use any of these ingredients to go easy on the salt as they already have salt. Always check for salt after using them, especially yeast extract and never add salt before as the dish may become too salty as a result .

3 thoughts on “How to give meals savoury flavour”