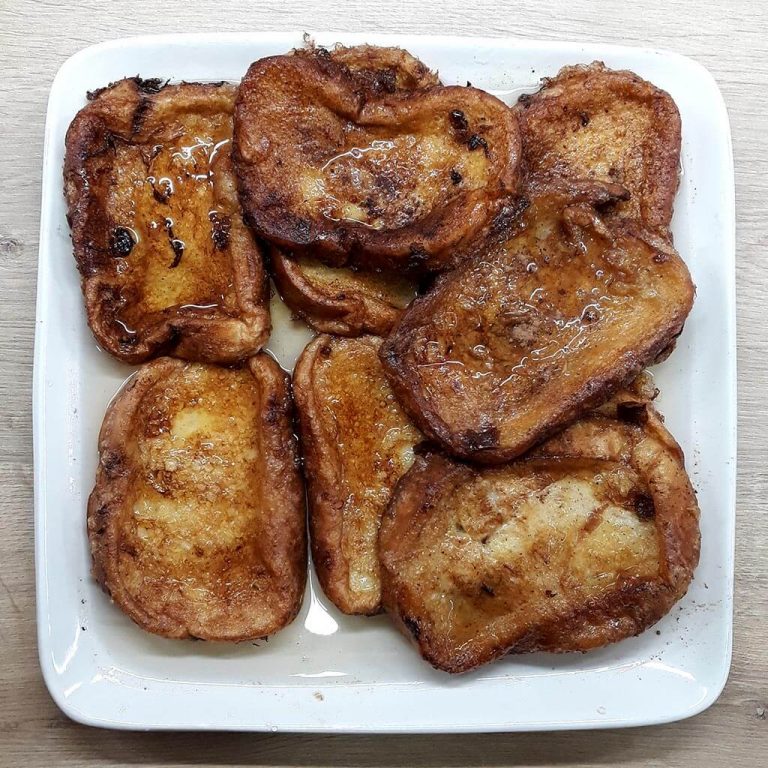 In Gibraltar you know it is Easter time when people make Torrijas. They are similar to French toast, and there is no direct translation so you could call them Spanish toast. Torrijas are creamy on the inside, sweet, cinnamony and absolutely heavenly! There are 2 main variations of them – some people make torrijas and then drench them in a simple syrup (my favourite) or cover them in a mix of sugar and cinnamon. Either way I have never met a single person who doesn’t like them.

Torrijas are a classic and traditional Spanish sweet traditionally made during the Easter festive period with the recipe going back to at least the 15th century, although it is probably older. Everyone says that their favourite is their mum’s, and I have to concur! In fact this is my mother’s recipe. Having said that, my friend Nicole makes a mean torrija too. She makes them for the Calentita food festival in Gibraltar every June for the ‘Traditional Gibraltar Sweets” stall, and while the stall sells out, the first sweet that usually sells out early on are the torrijas. That is a measure of how popular they are!

Torrijas can be found ready made at the supermarket, cake shops, even some bars and restaurants but I have never had one as good as home made, and it pays to make them yourself as the recipe is relatively easy and cheap! As with many traditional Spanish dishes, bread is used. With torrijas, bread is simply a medium as it soaks up the sweet infused milk mixture and them becomes creamy when cooked. The milk is infused with lemon rind and cinnamon. The lemon rind will release lots of lemony flavour and combined with cinnamon is a classic of many Spanish desserts.

It is best to use bread which is slightly stale (from the day before) as it will soak up more liquid and make it creamier on the inside. You can either use thick cut sliced bread (the thicker the better) or a normal baguette cut into slices about 3cm (1 inch) thick. In Spanish supermarkets you can find bread especially made for torrijas, usually already sliced. It is important to not remove the crust as otherwise it will fall apart.

Join VeggieGib for email updates and get a FREE eCookbook with 15 easy and tasty veggie/vegan recipes.
Thanks! Please check your emails to confirm your subscription and you will be sent the FREE eCookbook. If you do not see the email please check your spam/junk mail folder.
Traditional Torrijas Recipe
Yield: Approx 18-20 Servings
Difficulty: Easy
Cooking time: 1 Hour

Torrijas are traditionally Spanish; bread soaked in milk, infused with lemon and cinnamon and drenched in syrup. Torrijas are creamy on the inside, sweet, cinnamony and absolutely heavenly!