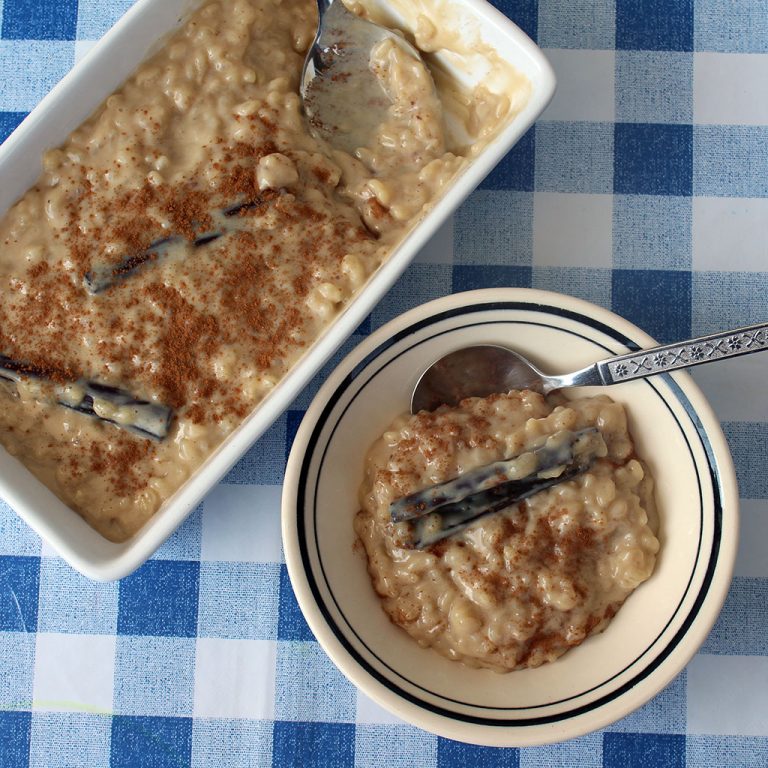 Arroz con leche, or rice pudding infused with cinnamon and lemon zest is one of my favourite comfort foods. It’s not fancy or gourmet, but it is proper home cooking. I recently posted the regular version of arroz con leche, which is a family recipe but I tend to make a dairy free (and vegan) version of this because a few years ago my father realised he was lactose intolerant so I decided to make this dairy free version for him. I have been making it ever since because I prefer to cook dairy free whenever I can.

There really isn’t much difference in taste to the regular arroz con leche, and none in texture. Instead of using dairy milk I use unsweetened soya milk, preferably organic for the simple reason that some brands add extra thickening agents (such as guar gum) which can affect it when cooked. The same goes for the oat milk which I use as a replacement for the evaporated milk. Both flavours work well together and with the sweetness of the sugar, and the flavours of the cinnamon and lemon you wouldn’t know it was dairy free unless someone told you! The only discernible difference is in colour which is more of a cream colour than white. This version does require a little extra work because it is impossible to buy dairy free evaporated (or condensed milk) so it has to be made from scratch, but it is super easy. Basically it is a matter of just putting the oat milk in a pan to simmer and allow it to reduce by just over more than half of it’s original amount. This can be done at the same time as the rice pudding is cooking. Overall this is just as sweet, creamy and comforting as the regular version, which for me ticks all the right boxes.

Join VeggieGib for email updates and get a FREE eCookbook with 15 easy and tasty veggie/vegan recipes.
Thanks! Please check your emails to confirm your subscription and you will be sent the FREE eCookbook. If you do not see the email please check your spam/junk mail folder.
Dairy Free & Vegan Arroz Con Leche Recipe
Yield: 4 Servings
Difficulty: Medium
Cooking time: 1 Hour

For the evaporated oat milk