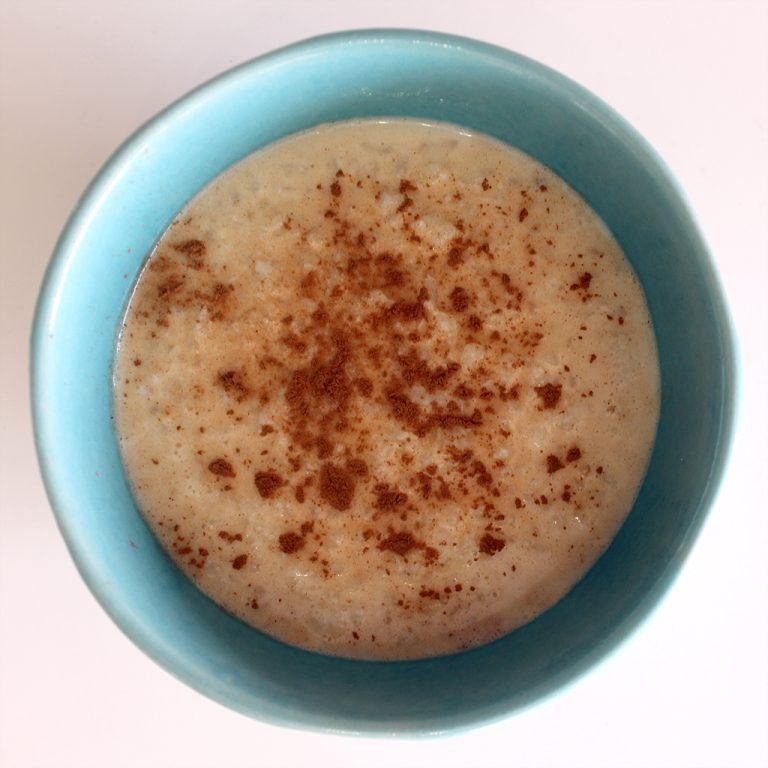 When I first went to university in the UK I stayed at the halls of residence and the food was notoriously bad. So one day I was delighted when I saw there was rice pudding for dessert. Little did I know it was nothing like the rice pudding I was accustomed to! I was even horrified to see a dollop of jam in the bowl.

Arroz con leche is the Spanish version of rice pudding, it is creamy, sweet and unlike the (bland) British counterpart, it is flavoured with lemon rind and cinnamon, a match made in heaven and so typical of many Spanish sweets.

Even though this is usually considered a basic home dessert, it still requires some skill as it can easily burn and needs quite a lot of stirring, although nothing too strenuous! In Gibraltar this is also very typical especially at Easter time, and it is usually served cold, straight from the refrigerator. It does take a long time to cook, but it is so worth it, and for me it is proper comfort food. It is also customary to sprinkle some ground cinnamon on top just before serving. It is also perfectly possible to make a vegan dairy free arroz con leche using dairy free milks.

Join VeggieGib for email updates and get a FREE eCookbook with 15 easy and tasty veggie/vegan recipes.
Thanks! Please check your emails to confirm your subscription and you will be sent the FREE eCookbook. If you do not see the email please check your spam/junk mail folder.
Arroz Con Leche – Spanish Rice Pudding Recipe
Yield: 8-10 Servings
Difficulty: Medium
Cooking time: 1 Hour