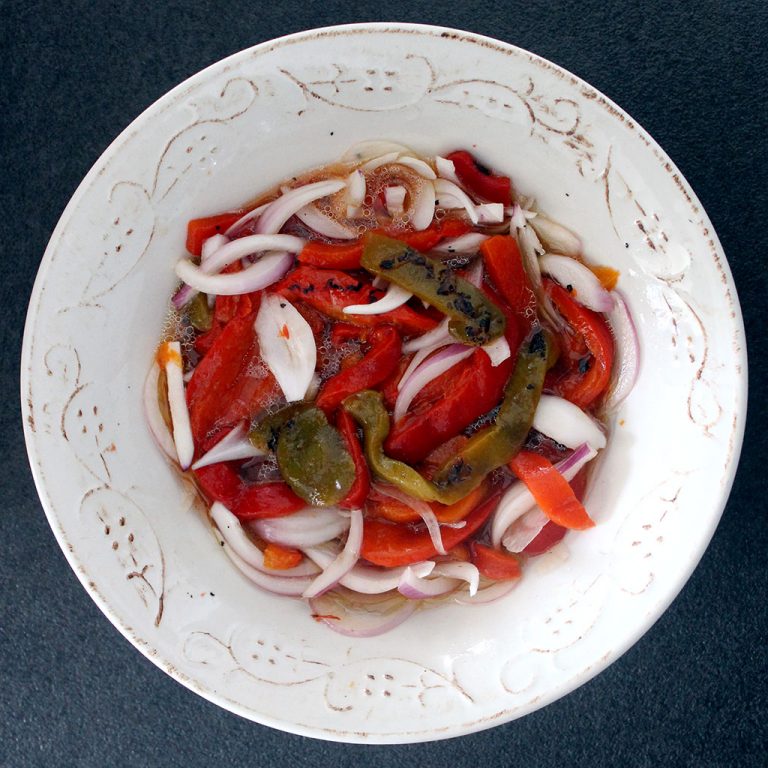 One of the typical summer salads not only in Gibraltar but also Andalusia, is a roast pepper salad also known as ‘pimientos asados‘. This is usually served as a side dish or as an accompaniment to various other tapas and ‘raciones‘. You can make this with only red peppers, although I like to use both red and green peppers as they each have their own individual flavour. At supermarkets here you can actually find packets of roasted peppers ready to use for this salad, however making it from scratch is quite easy. However if you are in a hurry, ready roasted are perfectly fine to use (in fact I use them all the time). It is best to use large bell peppers for this as they are nice and fleshy. You can also use tomatoes with this salad and even roast them with the peppers but I find it is perfectly fine without it. This is summer in a plate and tastes even better the day after, so the salad can be made in advance.

Join VeggieGib for email updates and get a FREE eCookbook with 15 easy and tasty veggie/vegan recipes.
Thanks! Please check your emails to confirm your subscription and you will be sent the FREE eCookbook. If you do not see the email please check your spam/junk mail folder.
Roast Pepper Salad Recipe
Yield: 4 Servings
Difficulty: Easy
Cooking time: 45 Minutes

Roast pepper salad is one of the typical summer salads not only in Gibraltar but also Andalusia, also known as 'pimientos asados'. You can make this with only red peppers, although I like to use both red and green peppers as they each have their own individual flavour.